I'm so happy to announce my brand new trilogy, Sea Dragons of Amber Bay! It's a Reverse Harem Paranormal Romance, meaning that one heroine has more than one love interest and she doesn't have to choose between them at all. 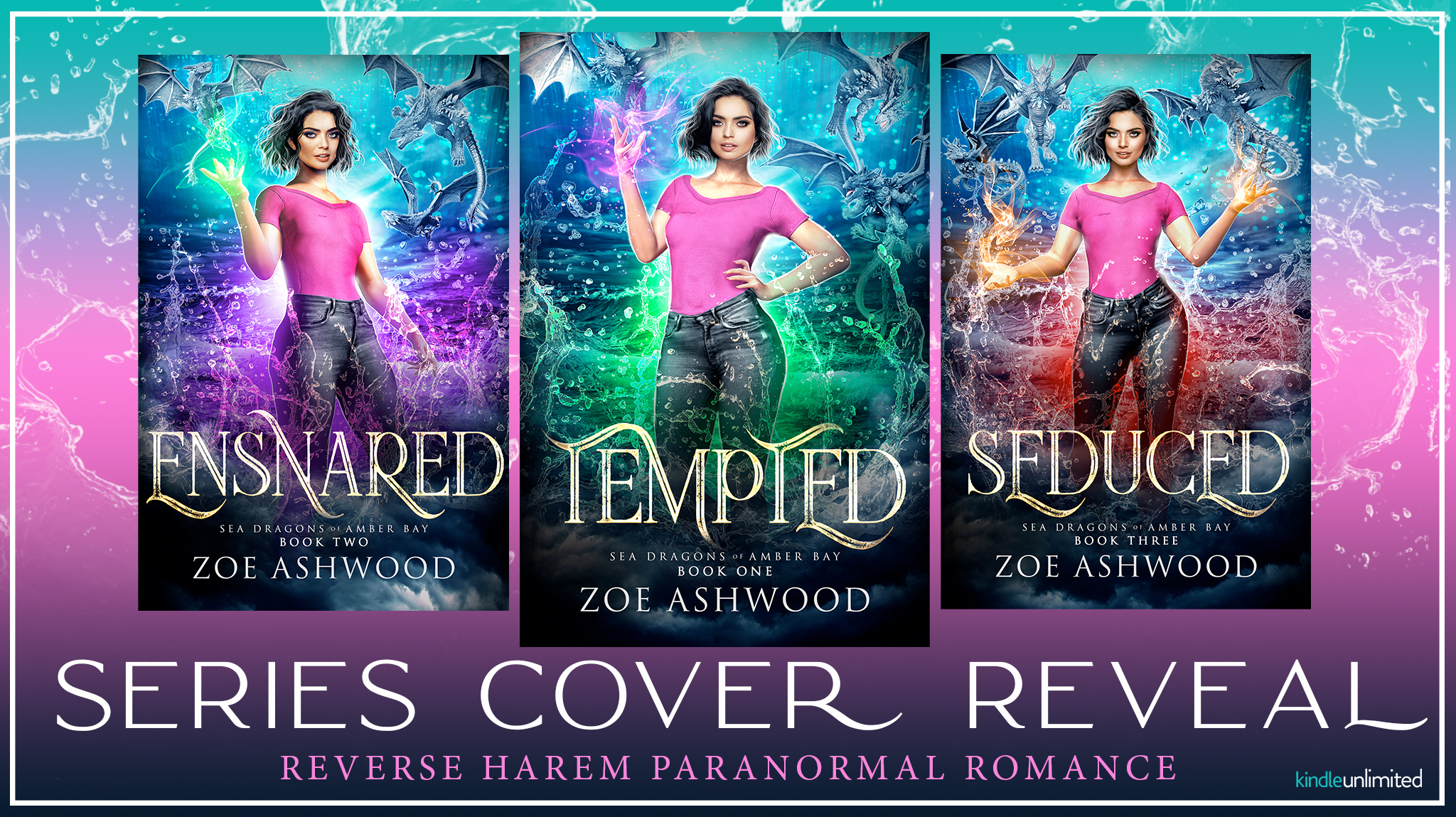 Tempted is the first book in the series. First readers are loving it, and I hope you will, too! Here's the blurb:

Who knew one small mistake—that just happened to go viral—would result in being exiled from my family and shunned by my coven?

Not me. Yet here I am, in nowhere, Alaska, armed only with a laptop and my Pomeranian.

But even witch magic can’t prepare a girl for the freezing temperatures, murderous moose, or the abundance of hot men.

Jack, Ty, and Aiden walked straight out of the freezing ocean like some mythical gods, water sluicing from their broad shoulders. What starts as burning attraction quickly turns into searing kisses and hot nights between the sheets.

But something isn’t right in this tiny Alaskan village. There aren’t any tourists. There’s no internet, and the locals shoo their children away when I walk past in the streets.

There are secrets here I long to uncover. But not if that means the risk of exposing my own.

Tempted is a ‘why choose’ paranormal romance perfect for readers who enjoy sassy heroines, sexy sea dragon shifter heroes, and enough steamy scenes to heat up even a cold Alaskan night. This is the first book of an ongoing trilogy.

And here's a close-up of the cover, created by the amazing Natasha Snow! 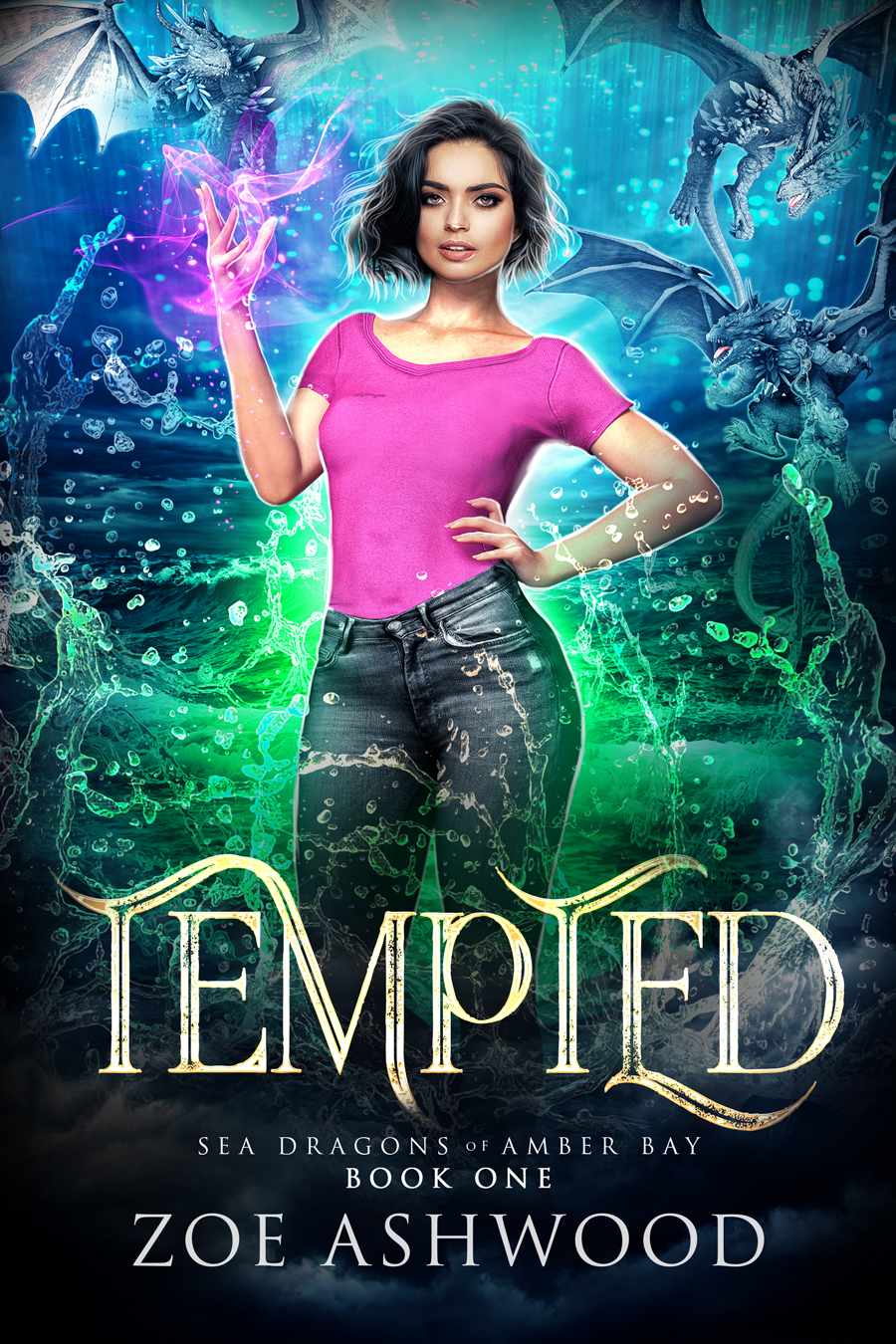 You can add Tempted on Goodreads and BookBub, as well as check out my Pinterest inspiration board for the series!

The plane shudders, and I grip the armrest to my left so hard, my knuckles turn white. I hate flying, so much so that I once drove from San Diego all the way to Massachusetts, but I couldn’t take my car this time. Driving to Alaska is pretty much impossible if you own an old VW Beetle.

On the seat to my right, a man snores, oblivious to my distress and to the very real possibility that my freaky magic could erupt at any moment and send us all plummeting to our deaths. I glance down at my wrists. Okay, my bracelets are still in place, so we’re safe for now. Probably.

There are so many electrical appliances and gadgets on this plane, my power would tear through them in a second if I let it. Being in close proximity to so much tech is painful even without access to my magic.

Touchdown in Anchorage is uneventful, and I finally let myself believe that we made it. All the passengers and crew are still alive. Maybe I should get a bottle of champagne to celebrate. My budget won’t allow that until I finish the work I’ve come here to do, so I give myself a mental pat on the back and count my blessings.

The moment I step out of the airplane, I take my first gulp of Alaskan air. It’s fresh, crisp, and, most importantly, it doesn’t smell of unwashed socks. The job I’m here for required me to pack up my bags in less than two days, but after I’m done, I have no plans.

A harried mother with two children in tow clicks her tongue behind me, so I hustle down the steps and onto the cracked tarmac. I’ve just spent half the day on planes, and for the second leg of the journey, had to hold my breath. The man seated next to me apparently didn’t believe in showering.

The line of people leads me to the airport shuttle waiting to carry us to the terminal building. I take care to stand as far away from my former neighbor as possible and let an elderly woman have the last free seat. Princess Penny is snoozing safely in her carrier. She’d been a real trooper on both flights so far—probably because I’d given her enough doggie treats to send her into a food coma.

I clutch the carrier close to my chest and try not to jostle the other passengers. It’s a short ride to the terminal, where they herd us through to the luggage carousels. The screen above ours flickers to life, and I feel the electricity spark inside it. Being in close proximity to so many electronic appliances is torture. Their systems are all wired differently, and it’s jarring to sense them all around me. But the exits are almost within reach, and I only need to wait for my suitcases before I can escape.

The dog carrier gets heavier the longer I hold it, so I put it on the floor and dig my phone from my purple backpack. The case has Hello Kitty on it, a gift from my sister. It’s her I call as soon as the phone turns on.

“Good.” The word comes on a sigh, as though Alice had been holding her breath for the entire time I’d been airborne. “How was your flight?”

“Smelly.” I wrinkle my nose even though she can’t see me. “But fine. I didn’t short-circuit the plane wiring by accident, so that’s a definite bonus.”

She chokes out a strangled laugh. “You’ve never short-circuited a plane.”

I relax my shoulders with a huge force of will. “Yeah, but that doesn’t mean it couldn’t happen.”

Electricity-related accidents happen a lot around me. But I’d put on my damper bracelets before the flights, so my almost nonexistent power was brought down to a complete halt. I’m itching to take them off, but not just yet. I need to be away from people. Sparks flying from my fingers are a definite possibility after wearing them for six hours straight.

“Are you sure you’re okay?”

Concern lines her voice, and I try not to cringe. She’s been mothering me for the past five months. I know she means well, and she’d saved my ass by letting me stay in her guest room, but I need to do this job on my own.

“Yep,” I say brightly. “All good. I’m excited about this project.”

“Hmm.” She must be puttering around her work room, cups clacking and paper shuffling. “Call me if you need anything, okay?”

“Will do.” I put the phone between my ear and shoulder and pull the first pink suitcase from the carousel with a big oof of effort. “Gotta go now. I need to find my contact.”

I disconnect and put the phone away, then wait for the other suitcase to drop from the maw of the carousel machine. Wheeling both down to the arrivals gate while carrying Princess Penny is a challenge, but I manage with minimum cursing, and only bang my shin once.

Then I spot the man standing behind the metal barrier, holding up a sign that says SKYE JONES.

I need a moment to just look at him.

His brown hair is closely cropped, his skin tan and golden as if he’s spent the short Alaskan summer outdoors. Even though it’s cool outside, he’s dressed in a gray t-shirt and jeans, the most basic of outfits, yet he wears it like a freaking model. The way his gaze darts around the crowd tells me he’s not comfortable here, and I can’t discern what color his eyes are, but there’s an intensity to him that draws me in.

Somebody jostles me from behind, muttering a swift apology, and I take my gaze off the man to move aside. When I glance at him again, he’s staring straight at me.

His eyebrows shoot up, and I see the moment he notices Princess Penny and my suitcases. The corner of his mouth twitches as though he’s trying not to laugh.

I straighten my spine, grit my teeth, and march toward him, prepared to withstand whatever smart remarks he’ll have about my Pomeranian and my pink luggage.

I shiver. I can’t help it. His voice, gravelly and deep, rolls down my spine like a caress, and words get stuck in my throat.

So instead of answering, I jerk my head in a curt nod. Making a great impression here, Skye.

“I’m Jack Thomas,” he says, extending his hand. “Aiden—Mr. Andrews—sent me to pick you up.”

I put my hand in his and shake it. My palm disappears in his larger one, and his skin is so warm, I’m sure my own seems clammy and cold in comparison. He gives my fingers a firm squeeze, then releases me, and I resist the urge to wipe my hand on my leggings.

He’s still staring at me, his gaze traveling up and down my body in a way that should feel intrusive, but he’s not leering or ogling my boobs.

In the end, he clears his throat. “Listen, uh, do you have anything more…weather-appropriate? Boots? A thicker jacket?”

I peer down at myself, then up at him. “This is the best I could come up with in two days. Mr. Andrews was insistent on bringing me here as fast as possible.” And I’m not completely unprepared. I brought my woolen mittens and scarf, as well as knee-high socks. Winter in Massachusetts is no walk in the park if you’re a SoCal kid, and I spent three winters there during my time at MIT.

He glances over his shoulder, his thick eyebrows knit together, and lowers his voice. The crowd of people coming off the Seattle flight I’d arrived on has dispersed, so his words are clearly audible.

“She’s wearing sneakers and leggings,” he mutters. “Yeah. No. I mean, I’m not sure.” He takes in the suitcases again, then squints at Princess Penny through the mesh on her carrier. “I’m betting that’s a no… Okay. Do I use the company card? Cool, thanks.”

He puts the phone away and faces me again. The conversation took less than a minute, and yet I somehow feel he has judged me in this time and passed a sentence based on first impressions only.

“What’s wrong with sneakers and leggings?” I ask.

The sneakers are my favorite pair, special edition teal high-top Adidas, and leggings are a part of my look, always. They’re not the height of fashion, but they’re comfortable, and I will not be judged by some mountain man.

“Uh.” He scratches the back of his head, and I can’t fail to notice the lines of a tattoo on the underside of his arm. “You’re going to need different gear where we’re going.”

“Oh, I have a jacket with me.” I pull it out of my backpack. It’s waterproof, warm, and lined with fleece, and I bought it specifically for this trip. “I checked the weather, and it’s supposed to be nice for the next two weeks.”

He snorts. “Okay, but this is Alaska.”

“Ye-es.” I drag the word out to two syllables. “It’s also August. I read about the average temperatures, and it says—”

“Miss Jones,” he interrupts. “This is an all-expenses paid work trip, yeah?”

I stop and stare at him. “Sure?” The contract I signed for the project had said as much, which was the only reason I’d flown two thousand miles, but I thought that meant airfare and lodging. “What about it?”