July 2016 is the first time I'm participating in CampNaNoWriMo. If you're unfamiliar with the term, it's a month-long writing event organized twice a year (in April and in July) where people set a writing goal they want to achieve, enter virtual cabins (like at real camp), and cheer each other on while writing. More details about that here.

I decided to work on the first draft of my second novel, the sequel to Here to Stay. Given my work and family obligations, I opted for a word count of 22,000 words - which meant I was going to have to write 710 words every day to make my goal. I decided on an even word count for every day as I already have a #writechain challenge going and wanted to write every day in July as well.

CampNaNo differs from NaNoWriMo, probably the biggest online writing event that happens every November, in that it allows for custom writing goals. You can even edit your novel, write blog posts, write poetry, or do whatever pleases you - just as long as you set measurable goals and then try to reach them by the end of the month. When I did NaNoWriMo last fall, I won - but I was completely burnt out by the end of the month. Writing 50,000 words in 30 days was simply too much for me. I don't do well with binge writing, which is why the aforementioned #writechain challenge works so well for me. When I finished writing my 50k words for NaNo, I left the manuscript untouched - it is the story that I'm only writing now, though I scrapped most of what I wrote then. 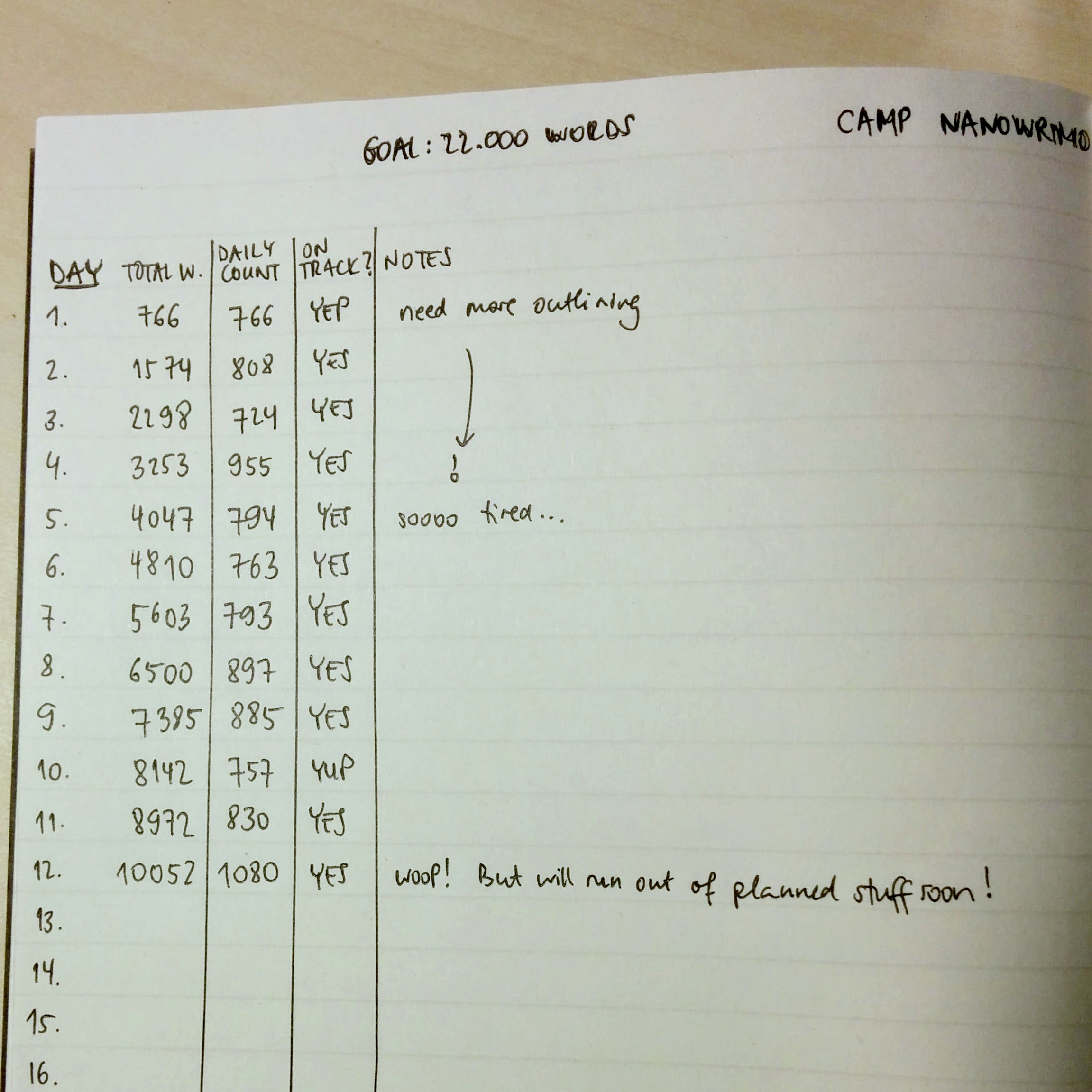 So now I'm still on track with my goal, and will most definitely be finishing it soon. I'm doing some editing on Here to Stay as well - which is why I probably won't write much more than 22k this month, but it will be enough. Three such months almost mean a finished first draft! I did some planning ahead - and also took some time after two weeks of writing to plot some more, because otherwise I would have written myself into a corner. I love knowing what will happen - the general direction, at least.

I also like the cabin feature of the camp a lot. With NaNoWriMo, you get to collect friends - and you can see how much progress they're making, but there's not as much interaction, unless you're visiting the forums. But cabins are specific (I think the limit is 12 people or so) and you get to interact with your cabin-mates in a closed setting. I do wish my cabin was livelier, perhaps, but we chatted a bit about our projects and encouraged each other, which is really all a writer needs when doing such a project.

I think I'll be participating in NaNoWriMo this year - purely for the community. I like following the appropriate hashtags on Twitter (#campnano, #campnanowrimo, and some variations of the two) because you get a lot of insight into other writers' methods and strategies for completing their goals - and you get to commiserate with fellow slackers if you happen to fall behind. :) But I'm pretty sure I won't be going for the full 50k - it's a lot of words for one month.

My advice for participating in any such event would be:

Now, I'm very curious about your own experience with such events. Have you ever done NaNo or CampNano? Did they work for you? Are you a binge writer or do you prosper from writing smaller sections of your story every day?

I'd love to hear from you!

This post was published on July 23, 2016 in writing and tagged campnano nanowrimo writing.